Tonight we’ve been playing Uno and Monopoly Deal card games. Cheesy Christmas songs and then the new “War Of The Worlds” cd again. Not traditional as such, but kids chose war of the Worlds, believe it or not. Jen is a bit obsessed by it, but I remember I wore out my mother’s record copy of the original! Takes after me. 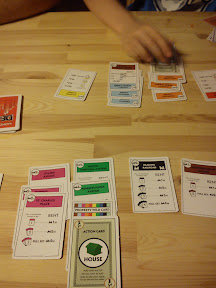 We were playing cards for hours. Monopoly deal is much easier than the board game. I recommend it a lot. Its no good for Jen but he isn’t good at maths or reading yet – he’s four years old.
D is great at this though.

Basic point is some cards are properties like the four black train stations and super expensive dark blues and some are wild cards, a property card with more than one property but you must chose what colour you are using it as. See the photo. Some cards are cash, a few “it’s your birthday” cards and some new ones called sly deal and deal breakers where you nick whole or part sets from each other. If you are lucky there is a “just say no” card you can use to block someone stealing your property or charging you massive rent.

It is similar to normal monopoly in some ways but there is no jail. You win by being the first player to three property sets. Games take us between five minutes and half an hour. So much better as we’ve managed to play this on a train. Can you imagine classic monopoly on a train?!

Partner and I were playing this to the small hours… Many games when you lose you get grumpy, for some reason this game is fun to win or lose and is still great for two players. Emergency stocking filler anyone? I’d rather have this than a cd by a favourite band or even over a good make up set. 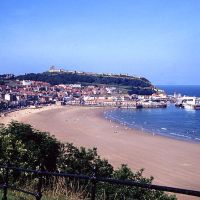