After years being a bit anti the charity shoe box schemes I’ve decided I will give a box to a girl overseas. This change of heart is entirely MichelleTwinMum’s doing. Last year she went with Operation Christmas Child, (or OCC for short) to Belarus to see how they operate and who gets the shoebox parcels. You can read all about it on Michelle’s blog by clicking on the link here.

I had always been sceptical after hearing rumours of parcels not being given to non Christian children, or only given to the children that would also accept a bible. Mich said nothing like that happened when she was with them, and this reassures me a lot as Mich wouldn’t lie.
I’m not Christian, so the heavily pushed religion idea didn’t sit well with me either, again Mich said that although OCC is a Christian charity there was no “force feeding” of Christianity. Nothing nasty. Which I’m jolly pleased to hear!

Last night Mich was co-hosting #OCCparty on twitter with @OCC_UK and I decided after a few tweets I read that I’d join in. 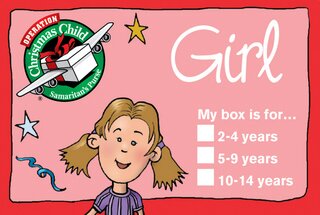 Well today I started, and finished a shoe box gift. I chose to make a girls gift as would be a nice change from buying for my boys. I’m a natural bargain hunter and have filled a box for under a tenner. If you want tips on what to include see OCC’s yes please / no thank you list. For each parcel you have to donate/pay £3 which is to cover sending the boxes to kids in needy places. Although they fill lorries with parcels and drive or air ship to far away places, rather than normal Royal Mail postage prices, it’s still going to cost them. A lot. So that £3 now makes sense. 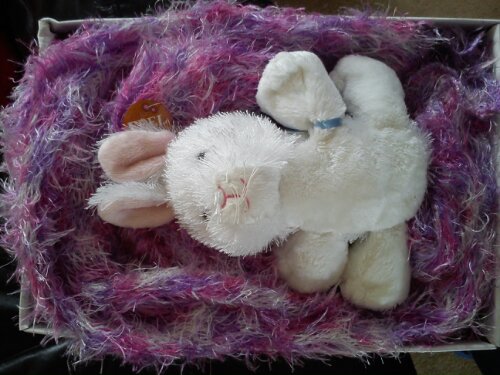 I spent £7.10 which means when you add the £3 towards postage etc it’s near enough £10.
The contents are a princess dress-up dress, a feather and glitter halo headband to wear with the dress as a fairy outfit! Two fairy themed colouring books, a few coloured pencils. A fairy princess stationary set in case this girl is an academic type. A pink bouncy ball, 3 party bag type basic musical toys, and a packet of Dolly mixtures. A pack of 3 pants, 3 pairs of socks in pinks and purple butterfly patterns, and a tiny pinball puzzle you get as party favours. A bar of soap, a fairy “door hanging” thingamygig – hard to explain but cute, and an Everything’s Rosie sticker book where you put facial features on the characters to make cute bunnies and people. And finally, a super cuddly Webkins teddy bunny. Both my lads tried to pinch this, but realised it was mean and put her back. On the plus side bunny is preloaded with love and hugs, thanks boys!! 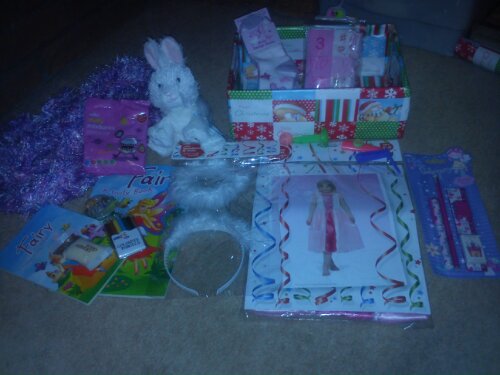 A tenner for all this to make a child smile? A child that could be in a bad place, affected by war? A child that might not get a gift for Christmas without schemes like this? Well, count me in.
If this sounds like something you could do pop to the OCC website (above) and get packing.