When we moved in to out house several years ago it had a patio the previous owners had installed themselves, which we were not very taken with. It looks ok, but it goes a nasty, dirty, mossy green and has no style. It’s so last century, and not in a good way! I want decking instead. 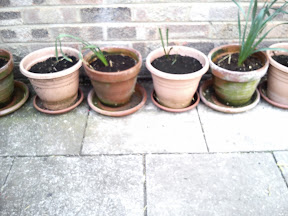 Ok, you’re looking at the first photo thinking that’s not so bad aren’t you? You’d be wrong I’m afraid, so were we as that is what we said when viewing the house. It is a bodge job! Not good at all is the fact they covered the air bricks in the outside walls, reducing ventilation in to the house, and so increasing the damp problem we do have. 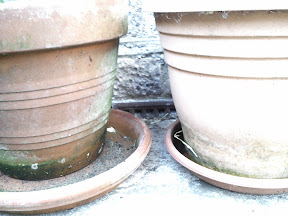 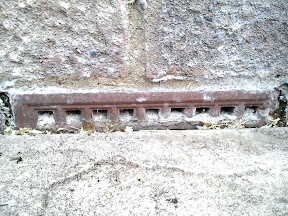 If we could afford it, I would phone a professional gardener handy man type from the yellow pages. I would like the nasty concrete slabs ripped up and nice decking laid were it was. The “floor” would still appear to be the same level, but air would flow towards those vents under the decking itself. It would fix a problem, and look lovely. My next-door neighbour has decked her patio area, but sorry I can’t photo that, I might get arrested popping a camera over the fence and snapping away! But I can confirm it works in this space – her garden and house is an identical layout and size to mine. So I’m just waiting on a winning Lotto ticket, then I’d do something like this.

Picture from richardburbidge.com
I love the decking you get with the grooves cut in to it, like the above photo. When it rains I think it would be less slippery. As wood ages and gets weathered, I personally think its appearance improves, unlike the patio tiles I am stuck with at the moment. I would love to sit outside with some garden furniture in the summer afternoons and watch my partner barbeque dinner for me and the boys. Picture from richardburbidge.com
Or I could sit out there to blog, No, Seriously! I have a special outdoors plug socket on the wall by the patio already (handy for a jet washer, or lawnmower). How lush would it be to blog from the garden decking, fruit juice in hand, in sunshine, with the pet bunnies hopping about my feet. Heaven!
It would be such an improvement and probably adds value to a property also.
This is a sponsored post, I was given the topic of garden decking, but the words are all my own, and I really genuinely want decking!