Our Freya Woof has “abandonment issues” following being dumped, and ending up stray. When she has company she’s super chilled out, except for the sudden bursts of playfulness. She only plays two or three times a day, and only a few minutes each time – its fair to say my hound is not energetic. 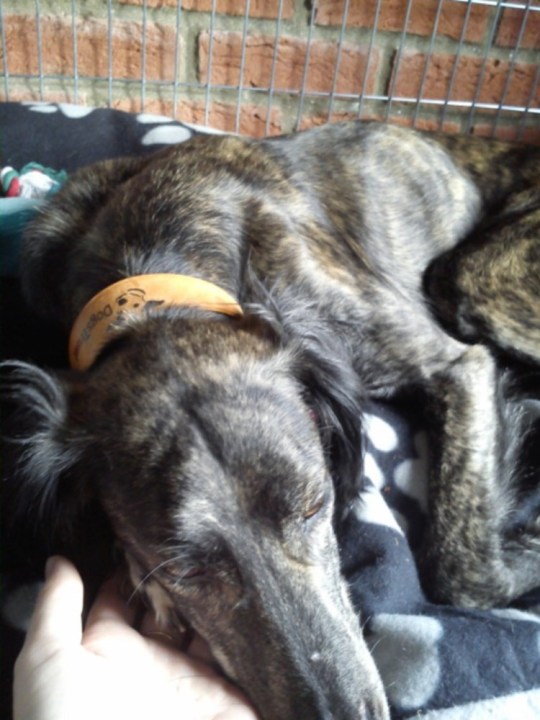 The problem comes if we leave the room, or house! If it’s dinner time and we all go to the kitchen table she will probably follow us within five minutes – she doesn’t pinch dinner or even pull the “puppy dog” begging face, she just needs to know where her people (thats us) are. I can’t even peg the washing on the line in the back garden without her trying to chew or scratch her way through the back door, and she cries… Proper crying. She doesn’t stop until her people are back closeby.

Freya loves parcels, and likes corrugated cardboard to chomp on and chew and rip. I quickly removed the contents and let her play with the box. She was impressed, like a kid at Christmas it’s all about the packaging to my woofer. 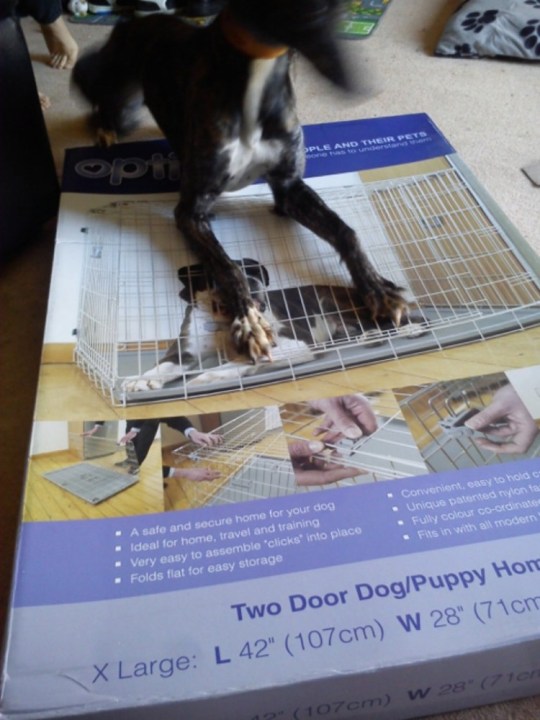 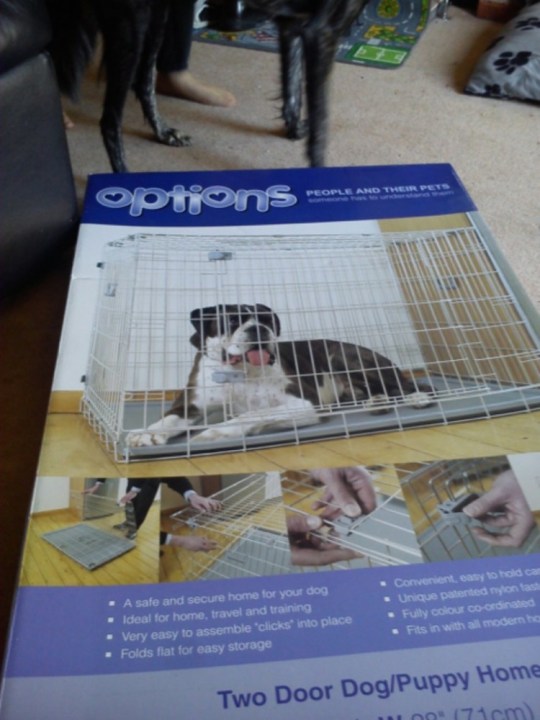 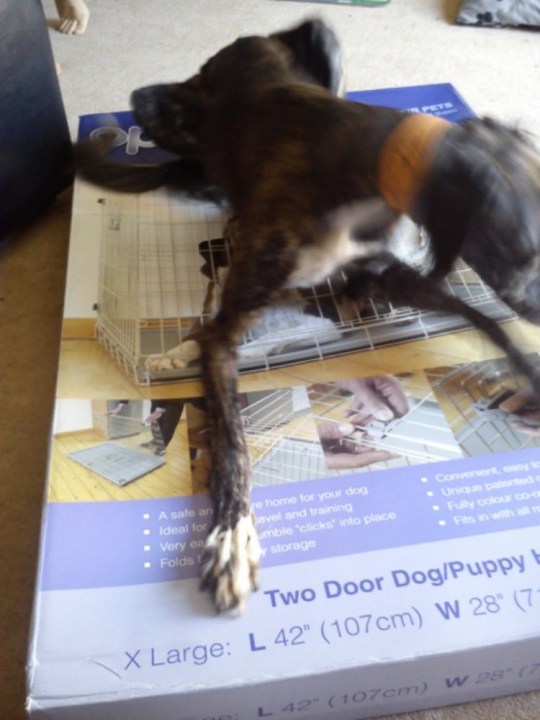 Yesterday I had to leave Freya entirely alone as it was my weekly therapy session. Over the last week I’ve been building Freya up to leaving her by encouraging her to use her crate wether alone or not. 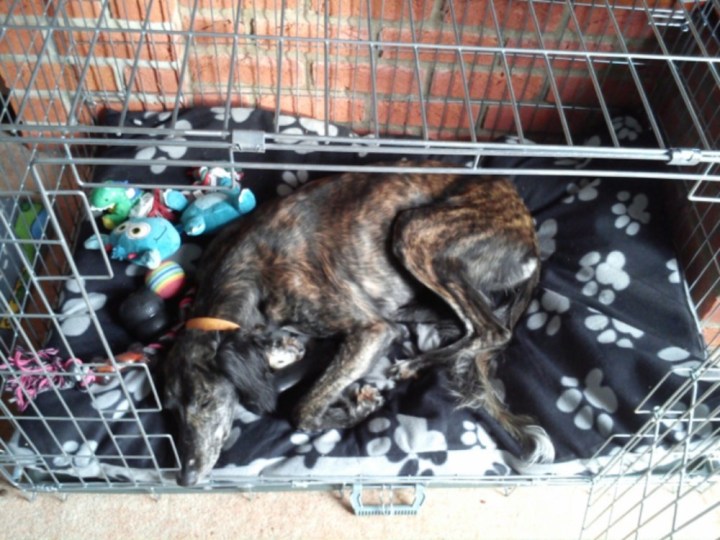 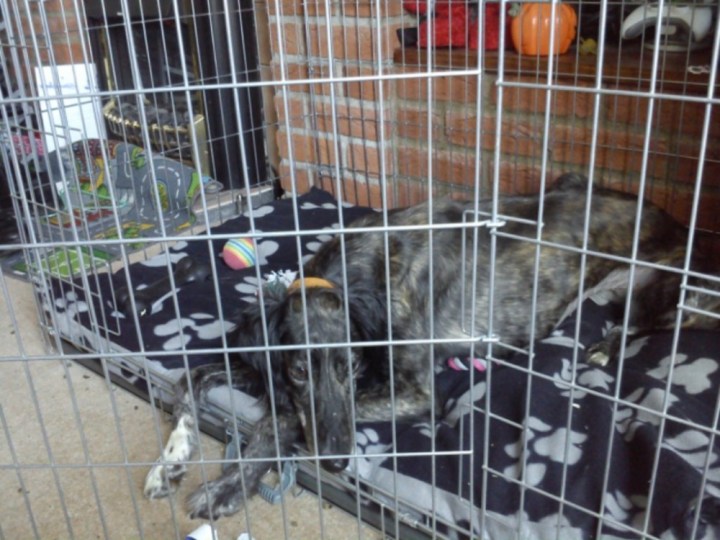 The crate (also called an indoor kennel or dog cage) is a Rosewood, kindly supplied by SwellPets. It’s solidly made, but is collapsible if necessary – so also great for when we go camping. It folds flat to the size of the base only, and has a carry handle, which is underneath the door in the photos above.

It has two doors, the main one is on the longest side, with a slightly smaller door on one of the short ends. The crate we have is the extra large – Freya isn’t a bulky dog, and she’s light enough to pick up easily, but due to her long legs she needed the extra height and length. I couldn’t put her in a crate she could not stand up in, that would be plain cruel even though she spends a lot of time curled up small. If your dog can’t stretch and move all their limbs you need the next size up.

The catches on the door have sturdy latches, made from a tough plastic with springs inside the plastic. Most dogs would be unable to destroy these locks but my Freya chews all that is plastic. The base is a strong plastic tray, and the wire continues around and under this tray, so even if your pooch tries to chew holes in the floor they should still be safely inside when you get home.

My girlie did inflict some damage on the crate, but from the Dogs trust’s advice about Freya I honestly was half expecting her to have escaped. She’s a determined chewer when she gets upset. She freaks out and destroys things in an attempt to get to people, she’s terrified we won’t come back. Hopefully this behaviour will drop off as she becomes used to my appointments and meetings, as I do things the same times most weeks. And of course when she is confident I always come back to her. 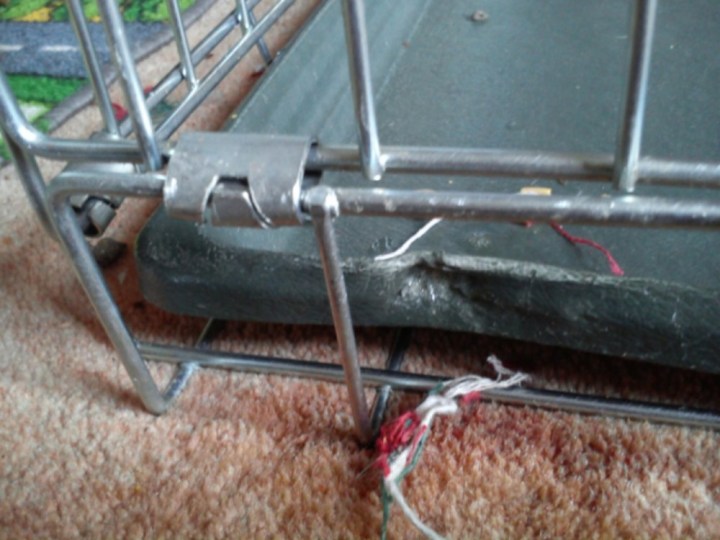 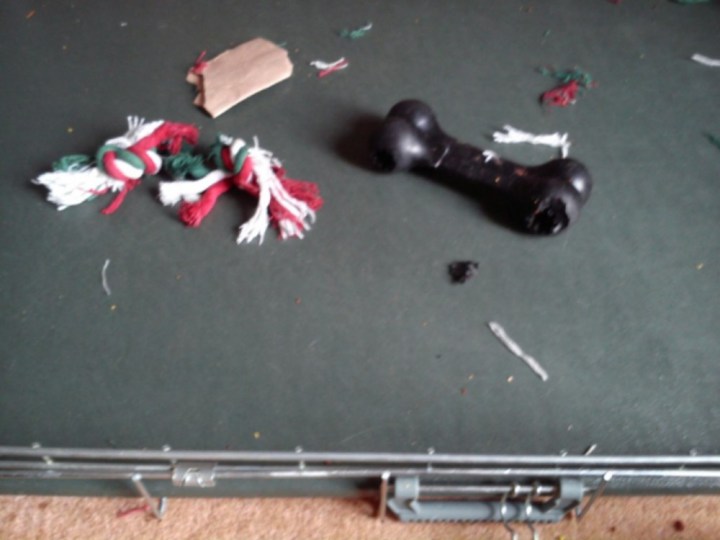 I’m pleased I removed the majority of her toys before I went out, otherwise she would have munched all her toys and the paw mattress we normally have in the crate. If she was un-caged she would be a danger to herself left home alone, who knows what she would have chewed – gas pipes or electrical items could be a fatal thing to stick her teeth into. Despite what Freya thinks, this is for her own good, for her safely. Not just the damage she could cause to belongings, but the property itself, I can imagine her smashing through a window in a desperate effort to find company. She really has a phobia of “Alone”, poor girlie.

When she’s home with us, she now happily uses this crate as her space, a resting area, somewhere to run if she wants to eat her treat chews in peace. But when alone in the crate, she’s frantic. That’s Freya Woof’s ex-owners fault, rather than the crate though! If you have a dog like Freya I strongly recommend you remove all but one or two toys, and your dogs bed. I’ve been using a Pound shop fleece blanket on the crates tray when Freya will be alone, as I know she’s going to chew and I’d rather she destroyed a pound blanket than all her toys and her bed.

All in all this crate is strong and good quality. I’d give it 10/10 for usability and 8/10 for escapability if you have an extremely anxious woof (9/10 for a normal dog).
It sells at £74.99 for the extra large, prices vary by size.

Thank you Swell pets, this has allowed me to leave the house a few times. I pop her in the crate when I want to hug or feed my bunnies and chickens without Freya worrying them or stalking them. 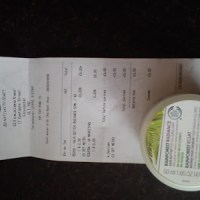 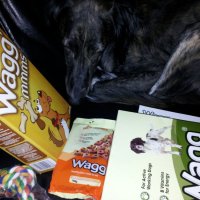