Over the last few months mice have stolen our garage. So I needed to evict them, but I love rodents (except rats) so I bought some “Live catch” traps. After a few weeks of trying I caught one.

Being the soppy moo I am, I had to release it somewhere nice, where it stood a chance. The instructions says a mile or more from where was caught or homing instincts will lead it back.
I had this mouse trap in a cotton bag on my lap whilst Blokey drove the car. It was about twenty miles until I saw a location I was happy with. A layby with a deep trench next to it. “Stop here” I say.

I get out the car with Jen as he wants to say “Bye mousey” and we walk across the bridge over this trench. It turns out to be a stream, so mousey can drink. On the other side of this bridge was a grassy field, with a couple of old trees and a nice thick bushy hedge row to provide it with hiding places from pet cats or wild birds.

As mousey stumbled out of the trap, alive and fit, but covered in their own wee, I suddenly got really upset and emotional. What if thats a mummy mouse? What if I’ve just split up a family? I hid my tears, but then mousey turned to face me, such a sad look in it’s eyes. What had I done?

Back in the car blokey clocks I’m trying not to cry, and asks whats up. I explain quietly, the boys were watching the DVDs in the back seats. He said I was overly nice, most people would have trapped and killed, or just poisoned that mouse. Instead I’d given it a safe place with food and water available. This was about 3 weeks ago.

Then today I want a foot pump to inflate the kids new paddling pool. I can’t find it, so I pull things from shelves and have a good look. I discovered the old tumble drier hose, which I thought had been binned, and it had teeth marks in. I carefully shake it out on the lawn.

Not good, not good at all. Straw (stolen from my bunnies hutches) fell out of the tube, then shredded packing paper, then two tiny sweet brown fluff balls. Two dead baby mice. Starved to death, by my actions. Gawd I feel so guilty. So mean. I was trying to be kind by rehoming the other mouse in the wild, instead I killed her babies. 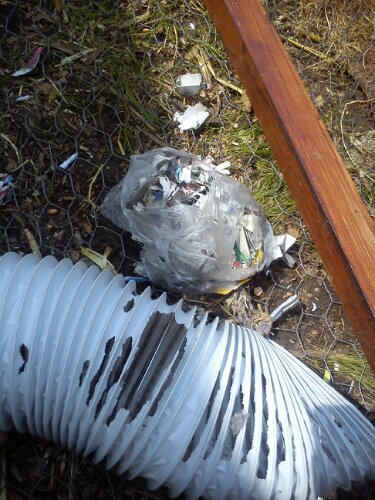 The chewed tube. I promise the deceased are not in this photo.

Now my next dilemma, leave them on lawn for birds to eat, a la nature. Or bury them under a flower as I always do with my pets.

When the boys returned from school, I asked their opinions, and the decision was made to bury them in the flower bed where Christopher rabbit was buried. The “headstone” is a pansy.