Christmas is about making things magical and special for the kiddies isn’t it? It isn’t about the price of presents, or the size of the turkey. Apparently the current generation of parents are determined to keep their children believing in Santa. The NSPCC surveyed 2000ish parents, and the findings of this are below.

Personally I think I’ve lost the “believe I Santa” thing with my boys, D hasn’t believed for years, and this year Jen tells me he doesn’t want “any silly gifts from Santa – I know that’s just YOU writing in your wrong hand!” Even if I have lost this fight, I intend to keep trying a bit longer, just in case. They will get a letter from Santa, we will feed the reindeers and we check out NORAD Santa radar together a few times on Christmas eve.

Family Christmas traditions are increasing in popularity across the nation as more and more parents embrace the magic of Santa, much more elaborately than their own parents once did.
The YouGov survey of 2,007 parents with children aged 18 and under*, conducted by the NSPCC for their Christmas ‘Letter from Santa’ fundraising campaign revealed the nation’s top 10 favourite festive family traditions to do with their children:

NSPCC Chief Executive said: “It’s great to see that treasured traditions such as Christmas letters dominate the top five in the poll with over half of UK children writing a letter to Santa. However, just a third actually get a reply from Mr Claus, which is why the NSPCC is offering to deliver a personalised Letter from Santa for a suggested donation of just £5 to help keep the magic of Christmas alive for all children.” 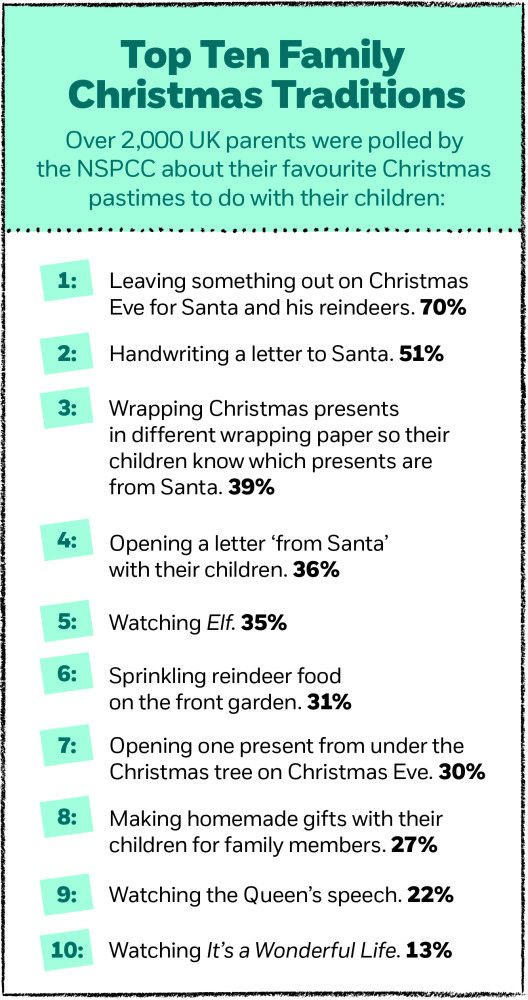 Proving to be an oldie and a goodie, sitting down to watch ‘It’s a Wonderful Life’ has increased in popularity over the years as new-fangled HD technology is shunned for a more simple pleasure of enjoying a black and white flick.

NSPCC supporter and Psychologist, Dr. Linda Papadopoulos, commented on the results: “Family traditions are an important part of childhood, giving children a sense of their past as well as a sense of what they can look forward to in the future. At Christmas time, whether it’s hand-writing a letter to Santa at the kitchen table, making mince pies or opening a letter from Santa, personalised traditions can be a great way to bring the family together.

“The folklore and traditions that we involve our kids in at this time of year give them a sense of what is valued by their family, showing them that they are a very special part of Christmas and giving them a sense of belonging.”

From asking parents about their own childhood, it seems that Christmas has also become craftier in recent times with parents making more of an effort (27%) creating homemade gifts with their children as opposed to 18% in times gone by, proving that it is the thought that counts.

Request your Letter from Santa for a suggested donation of £5 to the NSPCC at www.nspcc.org.uk/santa or by calling 0845 839 9304 until 15 December So get in quick.

3 thoughts on “Have you written to Santa yet?”