No, it’s not a lovey dovey Valentine’s day post. It’s an adoption story.

Recently I popped into Pets at Home just for dogs things I had on click and collect. I was not prepared for an accidental bunny adoption. But as I walked in there was a queue, so I had a quick nosey around the store. 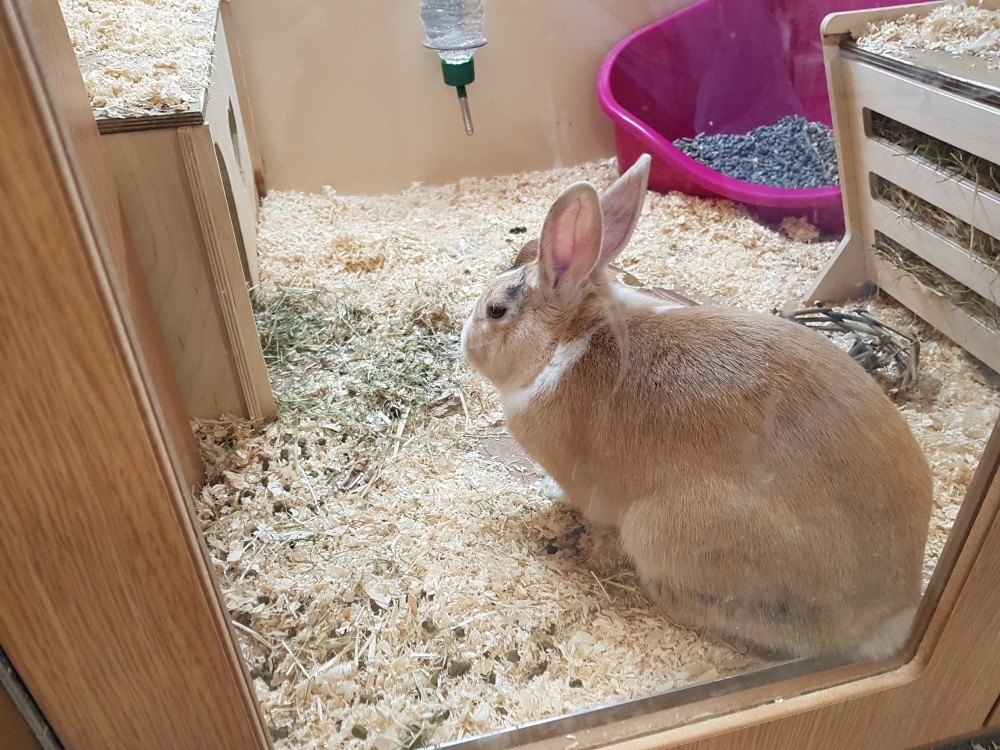 He put his paw to the glass, almost calling me over to him. He was looking straight at me, paw still pressed up to the window all hopeful.

I walked closer and I put my hand up to his paw. He responded by chinning where my hand was. As bunny people know, chinning is like saying “mine”. I spoke to him, and he responded to my voice, his face said get me out of here. I asked the staff chap nearby if he could grab the cage keys so I could meet him properly and he replies “I knew you were going to ask about him, I saw how he was towards you” and off he goes to get the keys.

Upon the staff member unlocking the cage I asked if I could do the handling and check him out. So I did what I shouldn’t do, and put my hand into his nest box – into the dark, into the territory of an animal who didn’t know me. His blurb next to the cage said he was nervous and bad with kids, and implied that he might be agressive.

I wanted to see if this was true, and it was not. Given the perfect chance and an excuse to attack me, yet he did not. Instead he allowed me to pick him up, and have a cuddle, then after a bit of a sniff he started chinning my shoulder, my face, my hands. I went to put him back in his cage, to see his reaction – he ran back towards me “erm, why are you putting me back?” and I knew he wanted to come home with me.

Every single action he did was bunny rabbit body language for saying he chose me. How could I refuse? 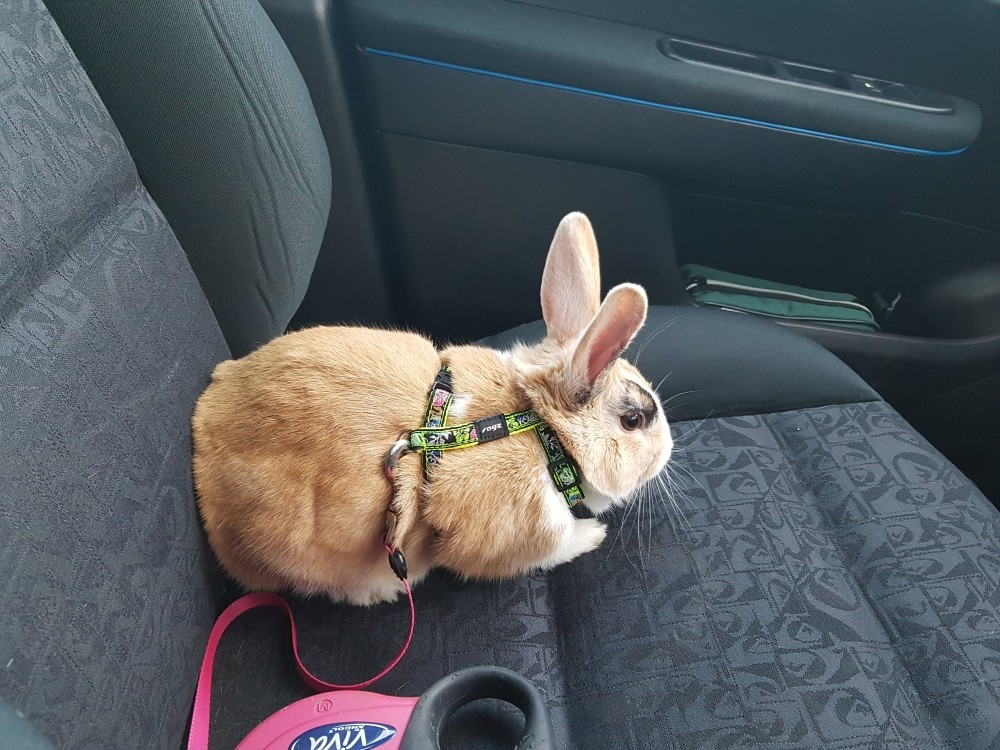 We called him Echo the Bunnyman

I didn’t pay the full suggested adoption fee, as I wasn’t expecting to part with money that day. The young chap serving me had no issue with that though, as it was obvious that this lonely rabbit had just chosen me, rather than the other way round.

As I was going though a basic health check on Echo we started talking – the chap was a rabbit owner himself, and also had previously had a rabbit that lived in to its teenage years like my old boy Patch. Pet rabbits rarely reach double digits. He seemed really happy Echo was going away with the person he wanted, rather than to a first time pet owner, and that I already had an empty hutch at home. 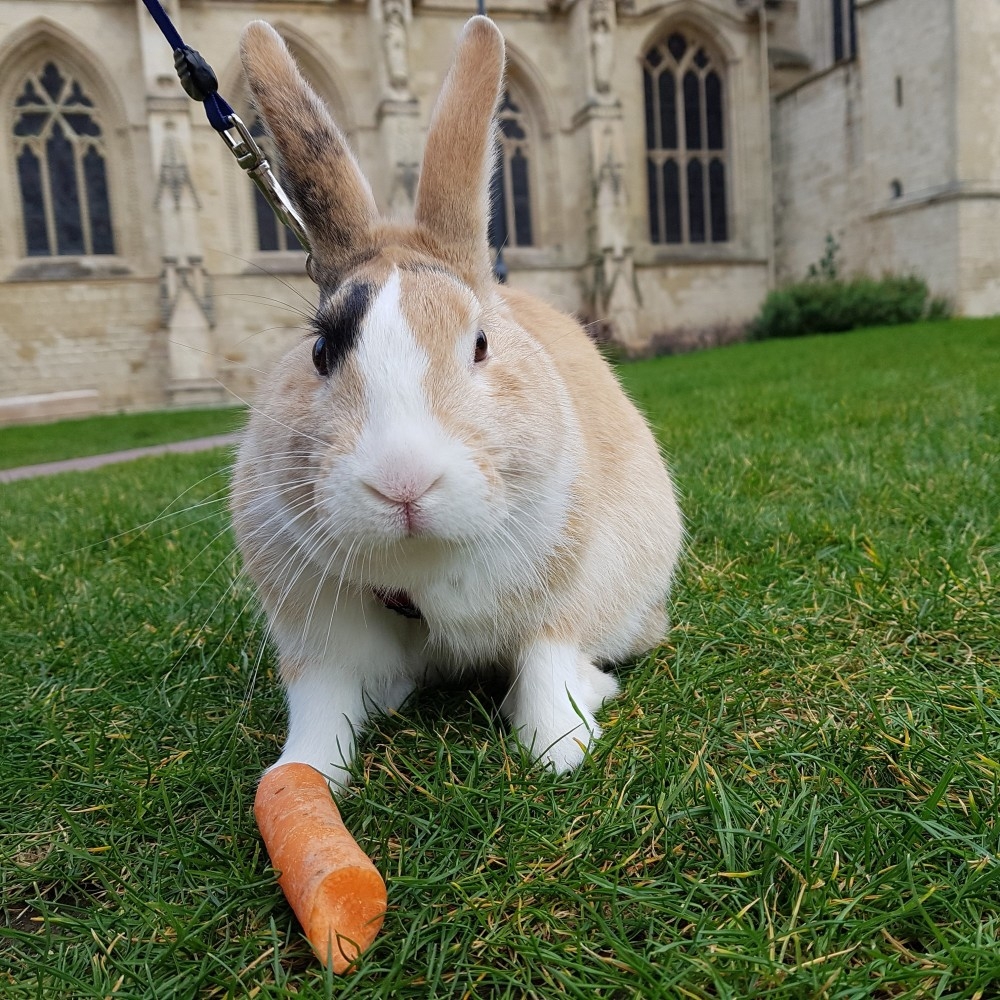 I take him out on a lead.

I love him as much as he seems to love me. 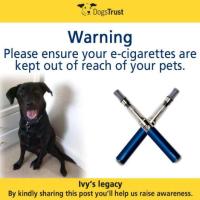