Nope, this isn’t going to be a soppy, lovey dovey post. But there will be photos.

We had a non traditional wedding, and I’m going to list the quirky bits, the me bits.
First up we didn’t go all bridezilla and crazy, things were booked fast then not worried about until just before the big day. There is no point stressing and almost needing a divorce before you’re even hitched.
Luckily neither of us are religious so that cut down on “rules” and traditions. We only informed family about a fortnight before the wedding, we invited just immediate family, a bridesmaid for me, a best man for him. One exception to the “family only” invites was our pal Kevin and his wife Lynn.
I married him because I love him, because he’s a freak that makes me giggle, because he keeps me sane (mostly) and for lots of other little personal reasons. Pretty sure his actions have saved my life more than once, and I want to spend the rest of my life with him. I proposed in January, not mega romantic and at home but that is because I know Blokey isn’t keen on public displays of love. I joke that he is part Vulcan.

Invites – cards from Hobbycraft, with words on the sides and a picture of Kermit and Miss Piggy in the middle. This Frog finally gave in….. printed on our EcoTank printer.

My Dress – Purple floor length evening gown I bought about 4 years ago with the intention of getting married in it. I didn’t have a “yes” back then, but I always knew I’d marry him eventually. 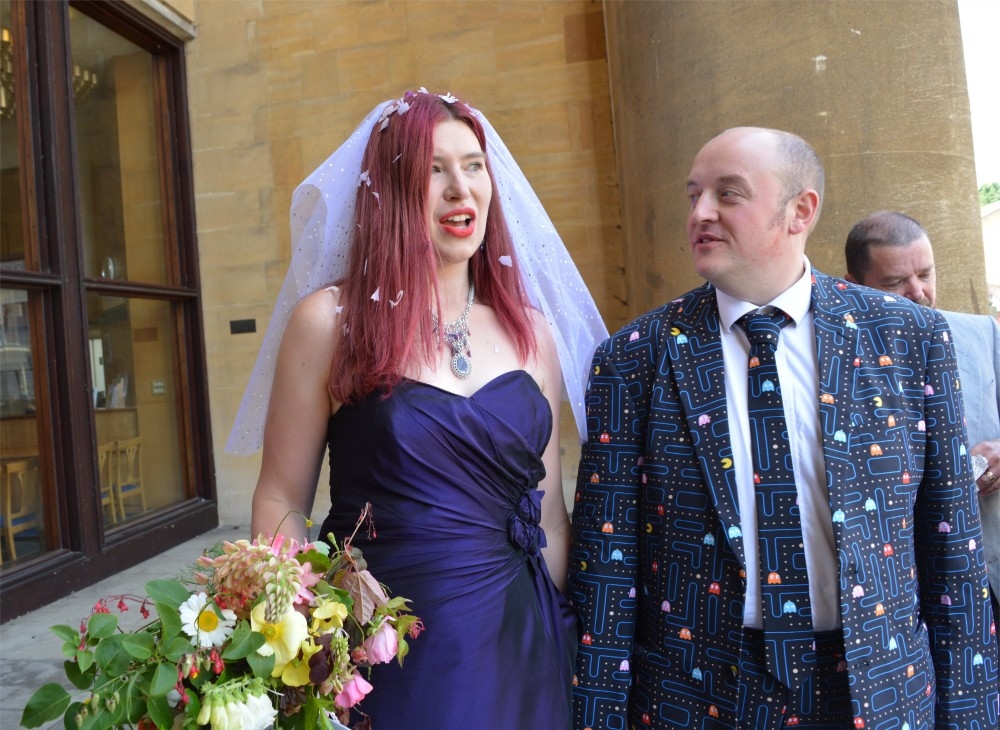 Yay! We are married.

Veil – homemade with love by me, using fabric from Hobbycraft and ribbon roses from the local haberdashery market stall. Bridal Jewellery – chainmaile with impure amethyst. I had a big necklace, some earrings and a bracelet made for me by Kay and her friend. It was unique and fabulous. This chap, he makes me too relaxed.

Shoes – found on eBay by the groom. He saw them and impulse purchased them so I customised them to work. I chopped the straps off, replacing with silver ribbon at the ankle and attached a single purple ribbon rose to the back of each ankle. On the underneath I wrote I do using pearl craft charms. Lingerie – let’s just say Ann Summers and it matched the dress. His suit – *that* PacMan suit by Opposuits. PacMan cufflinks too! His Facebook profile picture for the day was a PacMan image saying “Game Over”. Kids clothes – matching black shirts with white dots (to match their dad’s suit without being as OTT as him), black and white casual trainers and faded jeans. Venue – registry office in our home city. Shire Hall, Gloucester. Music in the service – Muse, the Manic Street Preachers, Metallica, Nah and the Whale, Guns ‘n Roses and Queen. No cheesy Take That or normal wedding songs. Reception – a pub in town. The Fountain Inn. These folks were great. I put some colouring books and pencils on the table and that kept my youngest guest very busy. 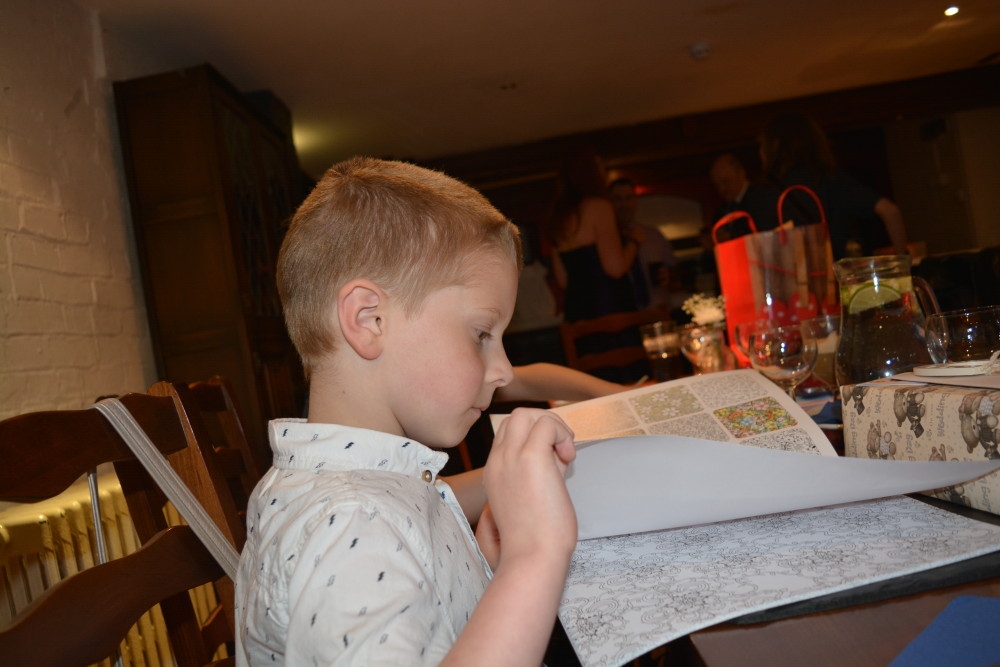 Food and booze – go to the bar and order. So much less stressful than people I’ve known stressing over things like should they have plain bacon or smoked…. orange squash or tropical squash. Too much drama, it’s just lunch. Seating plan – nope. Sit where you want. Dress code – none! Whatever makes you comfortable, I would have preferred no one wore purple but I didn’t ask so off course someone did. First dance – nope! We can’t dance, don’t be ridiculous. We had a microscooters* race instead. I won by cheating. But I did have blisters from running in these heels already though. Our nieces and nephews half-inched our wheels! I got them back of course.

Cake – home made by my wonderful groom of course. Not some elaborate princess of a cake, good old honest British carrot cake with messy icing. YUM. 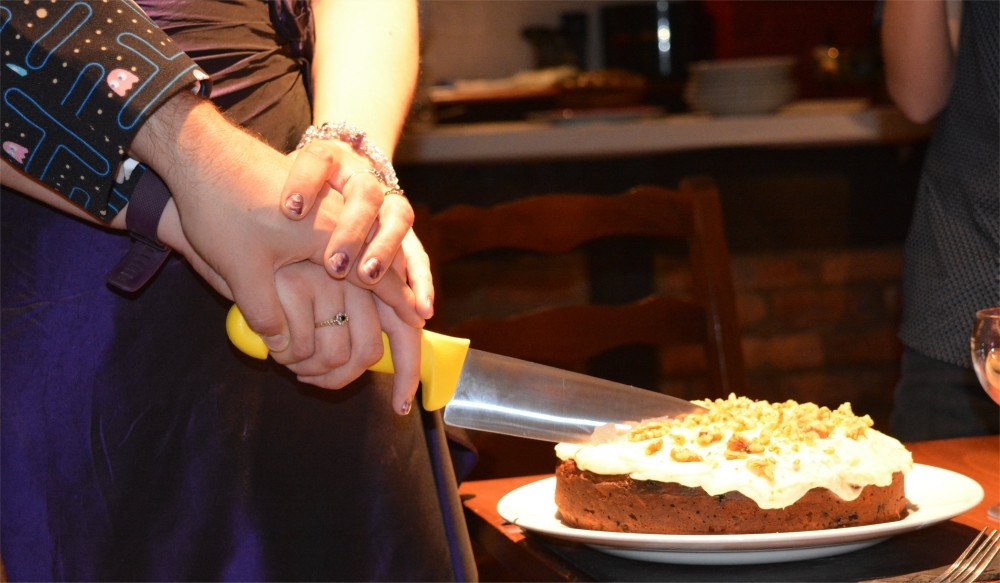 Wedding photographer – my eldest son Dee took his DSLR camera and my lovely bridesmaid and buddy PinkOddy also had her big camera. Rings – a simple plain silver band for him – he doesn’t do pretty. A gold ring with a triangle stone for me – I’ve never seen anything like it. This was from a local jewellery shop, and apparently people who were window shopping are still going back and asking them for this ring, but it was a one off and it’s mine. Sorry folks.

Flowers – My amazing bouquet was by Hannah of Bride and Bloom*. They looked much better before I left home, honest! 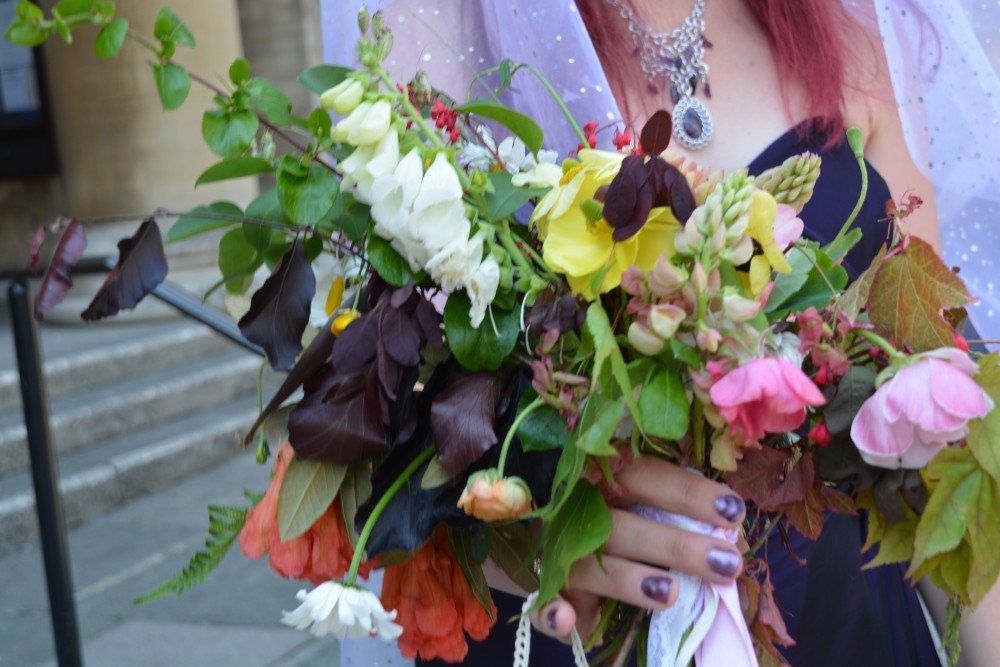 I loved these flowers so much I put the seeds from them in to my Wildflower bed in our garden afterwards. 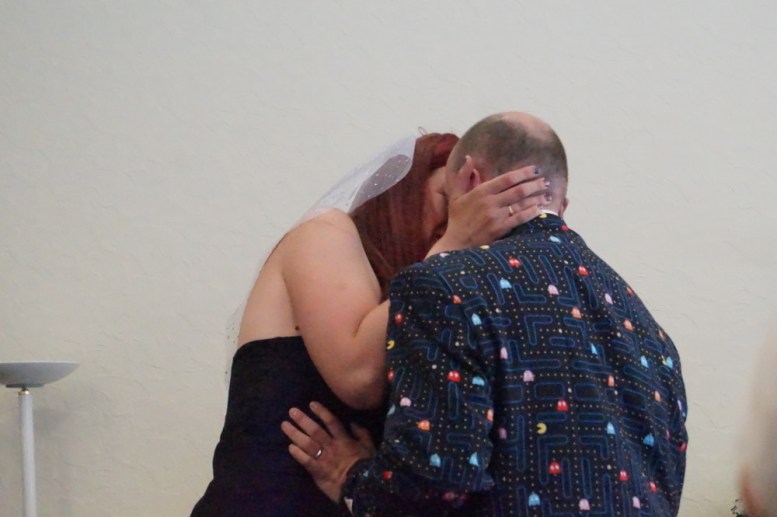 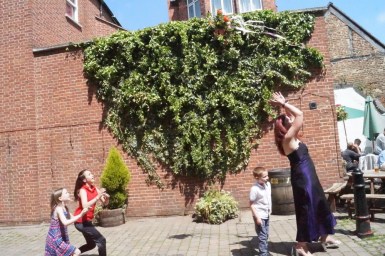 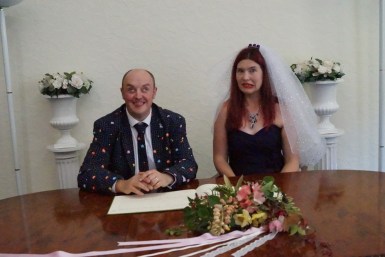 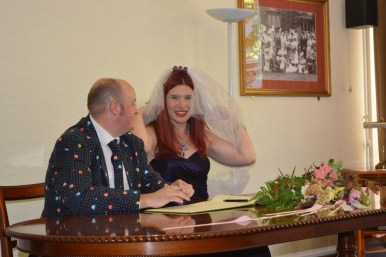 Does my head look big in this 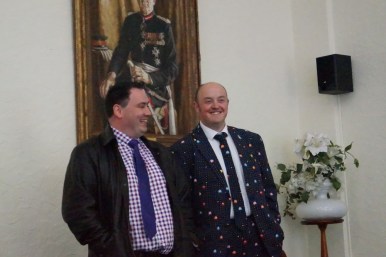 Waiting for me, but I was late 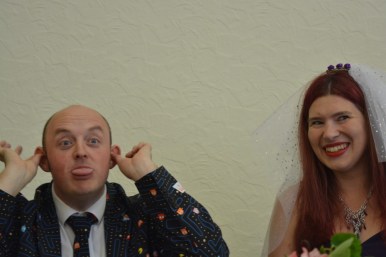 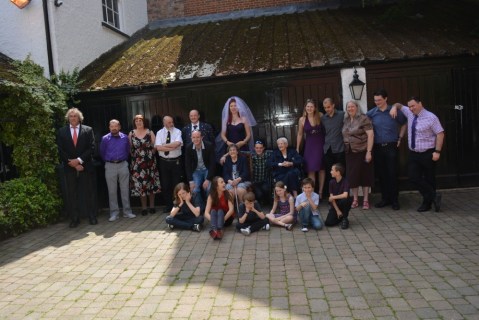 Not one photo where everyone is smiling! 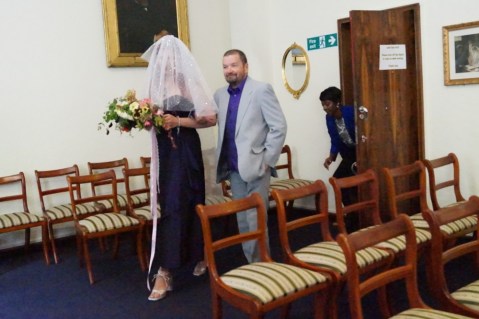 Here I come, in a hurry. 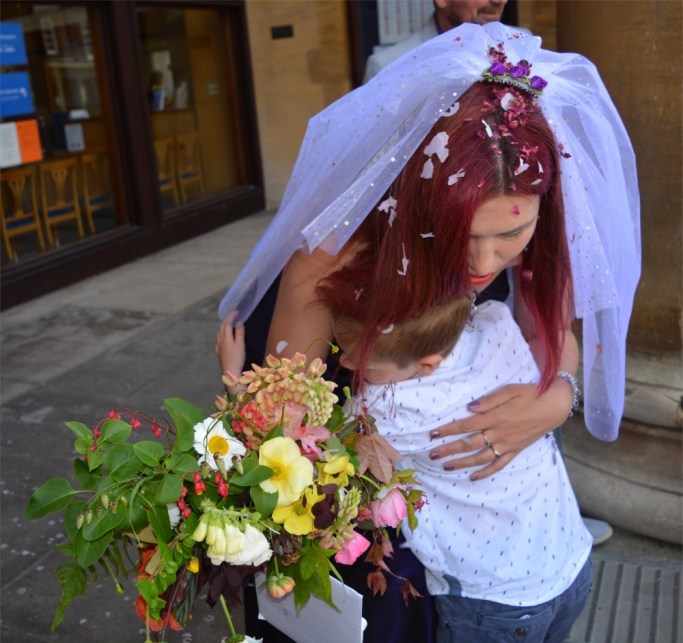 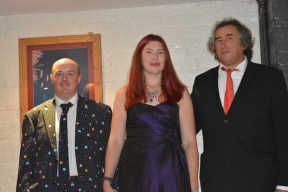 Husband, wife and Father of the bride. See, I’m short compared to my Dad. 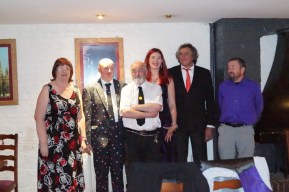 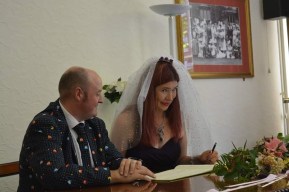 Signing the books, making it all official. 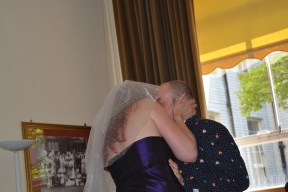 Links marked with * were gifted items.

3 thoughts on “Our wedding”