As regular readers will have spotted I like my rugby, and we are season ticket holders at our local club. Going to the match is a big thing around here, and the whole city is rugby focused. At the moment the city is gearing up for the rugby world cup as some of these matches are being hosted at Kingsholm. Everywhere you turn there are rugby posts, flags or rugby shirts.
So when I was contacted about the Pass around the world campaign I knew I wanted in, well except it mentions Saracens rugby, as that’s not the most popular team around here. 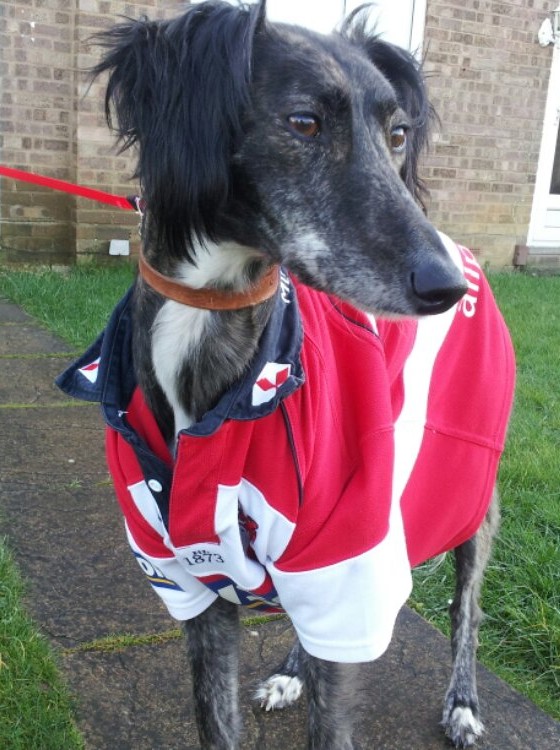 Freya Woof in a Gloucester shirt.

We might be slightly eccentric fans, but its fun to be part of the “Glaws Family” on match weekends. What is Pass around the world? Its a fun little project by Allianz and Saracens rugby- they want you to upload a video of you passing a rugby ball (under 10 seconds in length) so they can edit them all together and create an epic continuous line of passing the ball. The good bit is you might even win something for your effort. The prizes for the Pass around the world competition are as follows:

First prize (being the first selected entry) is a Saracens experience for 2 people to watch the team train, have lunch with the Saracens and a signed ball on the day. The exact date for this prize shall be agreed with the winner.

Second and third prize are a Ticketmaster voucher for £150.

Fourth prize is 2 tickets to a Saracens home premiership game of the winner’s choice in the 2015/16 season.

Fifth prize is a rugby ball signed by Owen Farrell, Chris Wyles and Hayden Smith, plus a replica Saracens home shirt for the 2015/16 season.

I can’t say I want first, fifth or sixth prize, I would accept the fourth prize though – a nice day out for Blokey and I. Fingers crossed for Ticketmaster vouchers. So do you want in? I’m going up the field right now to have a kick about. Even if you don’t like rugby (are you nuts?) you could still enter, just borrow a rugby ball from someone, you could spend the vouchers on a music concert instead.

What are you waiting for?
Here is our try!

One thought on “Let’s #PassAroundTheWorld with Saracens rugby”