A while back Pop goes your name sent little Jen a CD, not just any CD though, it has his name in the songs. Unlike much music aimed at children it is not offensive to grown up ears. 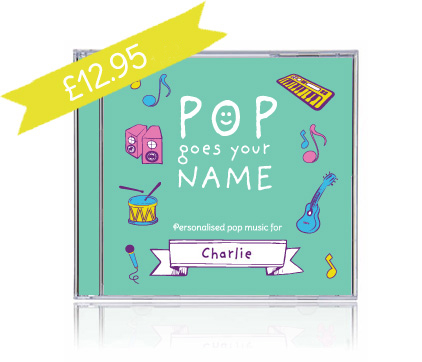 It has 12 songs, an un-personalised intro track, then 11 personalised songs. The music is decent, it is not the usual ultra cheesy toddler pop. It is sung by real people with real instruments, not just digital nonsense. My little guys name was sung by the same person that sang the rest of each song – I was half expecting the name to stand out, or worse to be in a totally different voice to the rest of the song. Thankfully it does not sound like an answer machine or Phoebe from friends. You can check out some sample tracks by Pop goes your name on their soundcloud.

It is a little gift I would recommend to his friend’s parents as stocking fillers, or maybe even as a gift from an older sibling. The product itself is professional looking, it is a cardboard case, but with a clear plastic CD section on the back “page” so it holds it nice and safe, and hopefully scratch free, I your car glove box or on your music shelves. Personally I recommend putting these tracks on to your iPod to use for distracting your mini-me’s on car journeys.

Here is a video review by my friend Liska AKA New Mum Online, I can’t do a video of Jen with his CD as Jen isn’t his real name, it’s just his online name.

A musical mum and dad in St Albans have created an album of pop music for young children. On an album of 12 songs, they recorded hundreds of different names to create a very special personalised gift for babies, toddlers and kids.

Lucy & Richard Patterson were inspired to write children’s songs after starting their own family. The album began life as songs sung to their first-born Noah & due to his very positive critical response they then went on to record & make “The Noah Album”. It then became a lifesaver for long car journeys & the soundtrack to many nappy changes, mealtimes, bathtimes & bedtimes.

After requests for personalised versions from friends and family, they decided to expand their name coverage to the top UK names. The project grew to involve a team of musicians, vocalists & also a design company, all based within or around St Albans.

The POP Goes Your Name album is a collection of fun & upbeat songs, each written for your someone special. Children can experience a selection of musical styles, with catchy melodies & sing-along lyrics whilst hearing their own name sung back to them. The songs have been written for children in their early years. From ‘Noisy Farm’ to ‘Rock it Out’, the songs are full of themes & sounds that children can recognize & understand & are guaranteed to get Mum & Dad’s feet tapping too!

Disclosure : I received a personalised CD with my son’s name to review. The words are mine, except for the quoted section, which is by Pop goes your name.