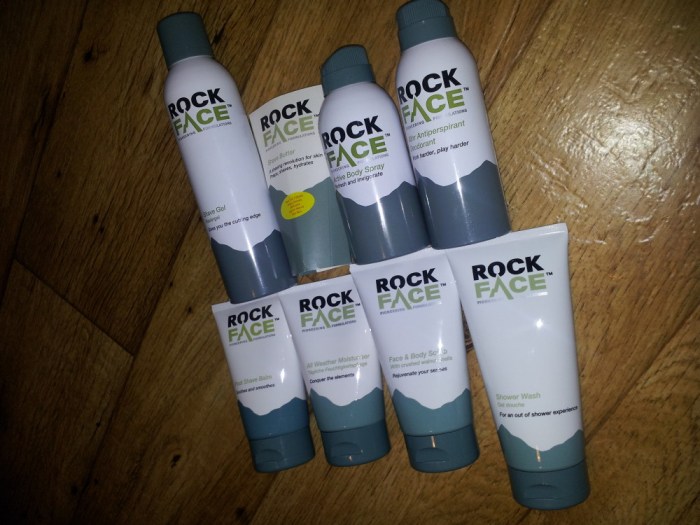 I will start by writing about products I have used myself, yes yes, I know I am not a man. One thing I will say first, is they all smell the same, which might seem a little dull, but it is actually brilliant – none of the products clash, they all match brilliantly. Think about of grooming products, some of the scents wouldn’t match so well like maybe white musk and chocolate or cucumber with coconut. Eeew!

Shave gel – This shaving gel is a nice gel, I used it on my legs in the bath as it goes. It squirts out of the can as a clear green gel, and goes a creamy-minty colour with a mousse like consistency. It rinses nicely, didn’t sting or dry out my skin, and the Rock Face scent (despite being aimed at men) is beautifully unisex. Blokey has tried it out when shaving each morning, and reports in a very manly fashion “it’s alright”. His skin is easily irritated, and has had no bad effect from any of the tried. 200ml is £3.95

Deodorant spray – This spray does the job. I refer roll-ons at the moment though, but Dee’s opinion was it was good and not too scented. I didn’t want to embarrass him by talking sweat with him, but there were no wet patches on his t-shirts. This is £3.45 for 150ml.

Shower wash – Despite being all butch sounding this shower gel is lovely. It makes a little foam, and those bubbles are strongly scented. When I used it I used it just on my skin, but Blokey really believes shower gel and shampoo are the same, and I can confirm his hair smelt of this wash. It did him no harm, but really guys, shower gel is not the same as shampoo. I really liked this, but I was outnumbered as Jen, Blokey and Dee have all been using it too. The RRP on this one is £3.95 for 200 ml. This is more than we would normally pay, but as a gift or treat it’s good stuff!

Face scrub – This is probably my favourite product in the range. It is an exfoliating face wash, with but of crushed walnut shells in it. Fab-u-lous! Blokey and Jen haven’t been using this, myself and Dee has. Dee is a pre-teen lad, he doesn’t really see the need for face washing products, but I know he has used this as he’s commented that its great that it scratches but doesn’t really scratch enough to leave lines on his face. My opinion? It sorted out the oily skin on and around my nose, felt efficient yet not too abrasive and it didn’t over dry my drier skin (like that fold where your ears join to your jaw area) and I will be buying this for me, not Dee! It costs £4.99 for 150ml – I know that’s a bit pricey for man-targeted products, but there are women’s face washes at these sorts of prices.

Body Spray – Active body spray is in the same nice citrus based fragrance, but it’s a bit stronger in this product, yay! It does what it says on tin, and I can’t really say much about it – but that is good as I’ve no complaints either. This is advertised at £3.49 for a 150ml spray can, which I believe is similar in pricing to Lynx.

The next three products I haven’t personally tried, nor did Dee, so I am quoting from the Rock Face website:

Post shave balm  –  This smoothing balm is specially formulated with allantoin and aloe vera to hydrate and soothe skin after shaving.  Apply liberally and smooth into the skin. 100ml 4.95

Moisturiser  –  A true all rounder moisturiser with added shea butter to help protect against pollution, guarana to energise the skin and antioxidants to help reduce UV impact.  Smooth onto clean skin. 100ml 5.49

Shave butter  – Containing two of the most nourishing butters in the world, illipe and shea butter, together with coconut and aloe juice, new Rockface Shave Butter takes shaving to a new level, prepping skin, shaving and hydrating, all in one clever shave butter. 75 ml £4.99

I liked every product I tried, and I sniff tested the ones I haven’t used. I recommend them as gifts (Fathers day, or men’s birthdays) but for most men (well men like mine) they like these products but I don’t think at these prices Blokey would buy them – If they were a bit cheaper I am sure he would.

The range is available to buy online and at Sainsburys and Waitrose stores. And it’s not just for men

Can you consider donating please?

Leave a Reply to Steve the groomer Cancel reply