Did you know Special K is 30 years old? Well it is. The lovely folks at BritMums sent me a box of new recipe Special K to try out. It’s better than I remembered, to be honest I used to hate the stuff, but I was happy to munch it this morning. So much so I might even buy it on the next big shop.
This is my entry for the BritMums and Special K How I’ve changed Linky challenge. 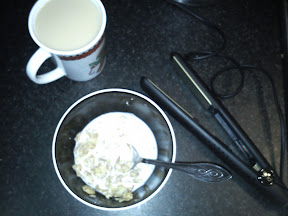 Thirty years is a long time, I was a toddler so my memory isn’t perfect. I would have been in cloth nappies still (probably), and would have been a right handful on stairs and pavements as I was an inquisitive type. But the music was brilliant in the Eighties, and I loved leg warmers and jump rope. I wanted a chopper bike, but never had one. I liked bands like Queen and The Eurhythmics.

In 1983 I lived with my Mum in a horrible block of flats on the Heathrow flight path in London. All I remember from living there was all my “new baby” gifts were stolen. There was a drug dealer that lived above us, and a prostitute in the flat below. It was Smokey smelling and miserable.

I couldn’t find any photos of the actual building, but Google led me to this gem, which feels similar to how I remembered the area. According to Wikpedia the £1 coin arrived in 1983, and the Ford Orion started being built. 1983 was also the year of the Brinks-MAT robbery at Heathrow, this was declared “crime of the century”, and Thatcher was in power for the entire decade. Terry Pratchett’s first Discworld novel, the colour of magic is published. The first British Breakfast TV program is broadcast. Wearing seatbelts in the front seats of a car became compulsory, and Clive Sinclair (The ZX Spectrum chap) was knighted.
It was the days of film and Polaroid.
Well, lots of little things happened actually, but I was too young to remember most of it.

I’m considerably larger than a toddler, and I myself am a Mother. I have had two of my own little handfuls through cloth nappies and potty training. Terry Pratchett is still writing the Discworld, three decades later, alas the illness is killing him and soon the brilliant writing will cease. Mrs Thatcher has died, and caused as much controversy in her funeral plans as she did in life as a politician. Wearing seatbelts is totally normal these days, and the ZX has been long since replaced by Tablet computers and consoles and all manner of smart tech.
I live in Gloucestershire, in a house with a garage, technically we are in a city, but we have massive open space near our home. Nothing like the London flats, which have been demolished as they were awful, truly awful! Now we might not have a big garden, but the boys have pets in the garden, and a huge field to play in, and 2 play parks within a 6-ish minutes bike ride away. Just want to say this IS NOT my actual house, but its very similar and local.
Nowadays everyone has smart phones, dvd handy cams and digital cameras, the passion for photography is gone, I used to adore taking rolls of film to the little chemists and waiting years (ok might have been a couple of days) to get my photos back, only the find my thumb in half of them! But now I have to scroll through the images on my computer and delete my sons most blurry images. This photo was taken by Jen using his Dad’s phone. He didn’t want to forget how the nearby docks look. And here is a delightful picture, snapped by D when he was much younger. Can I just say now, I might miss film itself, but I do not miss paying £5 a set of prints when my boys want photos of random stuff like a fence, a torch, a cloud and 26 thumb photos.
I’m glad I am a mum now, best thing I ever did, ok I’m skint in cash, but I feel needed, wanted, loved.
This post is my entry for the #SpecialK30 Linky on BritMums.