Being ex strays my girls really wolf down their food just in case they don’t get anything the next day. They aren’t so bad these days, they’ve got used to getting fed the right amount then getting a little top up in their bowls in the evenings. They will always try to get extra, and Freya used to hide treats and biscuits under the sofa for later. Nearly a month ago I started Freya and Doris on Tails dog food*, you tell them about your hound – weight, breed, health concerns and favourite meat flavours – they custom make the right food mixture for your hound. This means although Freya and Doris are very similar they have different food tailored to suit each of them. For Doris it’s aimed more at her age bracket and improving her digestion. I’ll be brutal, she normally has farts that could make a skunk feel inadequate. Since the change she has almost stopped poisoning us all with her “silent but deadly” gases. Such a relief. Doris seems to enjoy her blend of Tails food and often almost, but not quite, clears her bowl. This is reassuring to me that it is about the right amount of food for her and that I’m not under feeding her. When you own a saluki the world and their wife will tell you you are under feeding them as they are so thin. Freya’s food is calorie controlled to try to keep her weight steady and has bits to help with her joints. When she walks a lot she’ll hobble after a while. It’s not something I even thought about before, but the simple survey on Tails.com* asked a question about mobility. Freya gets bored if she eats the same thing each day and can be a bit fussy so I’ve added Wagg dry food a few times to keep her happy. 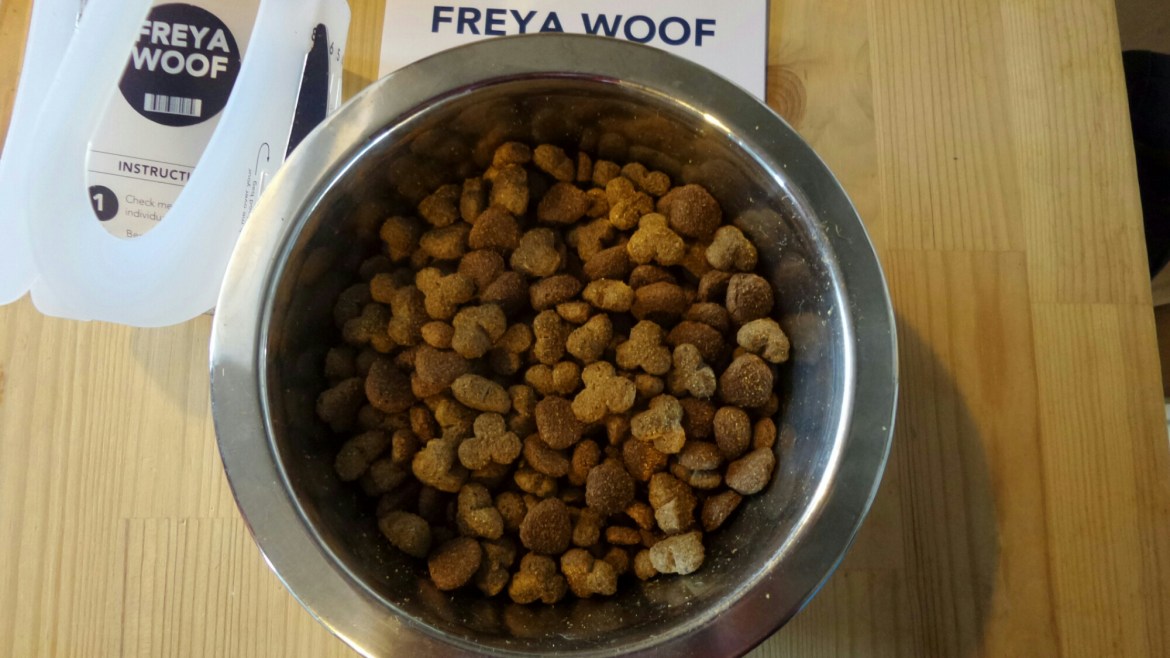 The food is sent as a subscription type of service, just today I received their second delivery of food ready for the next month. It was automatically made up again and delivered to me but I could have cancelled or amended the order before it was sent.

In the first delivery you get this little scoop thingamybob that you use to measure out the exact amount Tails say your dog needs. For my girls it’s two level scoops daily, but Doris’ scoop is slightly smaller than Freya’s. To be honest it didn’t seem enough to look at, I thought they’d be hungry but they haven’t been begging for scraps constantly – well unless Blokey is cooking a roast dinner.

Here’s the good bit. Julie’s Notebook readers can get a two week trial for just £1 delivery* which makes it about 7 pence a day during the trail. It’s reasonably priced after the trial for example Doris’ food is 52 pence a day. That’s slightly less than the cost of a tin of dog food, obviously that depends on where you shop.

Freya’s verdict “it’s alright but it’s not got bacon“. Doris would tell you to “buy it, I likes it“.

Disclosure : I received one bag free and one bag half price and paid full price on the second delivery.