Before I write too much I want to apologise for the pixelated images and badly done blurring – I was shouted at in a threatening manner for taking these images. I’ve made them fuzzy on purpose to avoid confrontation.

A few weeks back, around Easter time, the parking situation near one of our schools was becoming dangerous. A few parents took to Facebook asking people to park legally and considerately or have their parking photographed and sent to the police and shared on Facebook too. These photos I took were not to wind anyone up, I actually took them to try to share on my blog about road safety. Hopefully enough time has passed that I can write this without things “kicking off” at the school gates again. 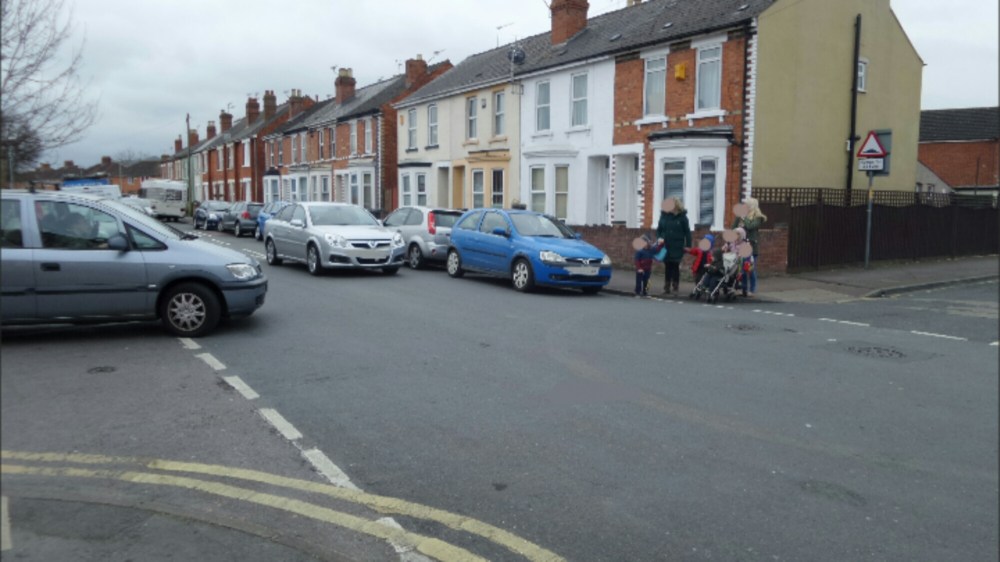 I don’t want to say which of my boys, but one of my children has been knocked down whilst cycling to school on this junction. It is a narrow road, with almost no parking for residents and multiple obstacles likes speed bumps, dropped curbs, double yellow lines and keep clear zig zags. This usually quiet and calm road goes crazy around 9am and 3pm. I don’t like parking here, but it got to a stage where it was getting scary to walk because of cars parked on the pavements and even across the junctions.

The photos I took were to show a blue car – I’m not wanting an argument if you are that car owner, honestly. I just want to talk about safety – see how hard it is for these Parent’s to cross this road? It is hard to see past parked cars, and there is a reason the rule is 10 metres away from a junction and not opposite a junction (this is doing both of these) – it’s so other road users, whether on foot or in a vehicle may see more clearly if it is safe to cross. If I have to drive (if I’m struggling and feeling unwell or if I need to go somewhere straight after the school run) I honestly cannot see if anything is coming if you park where that blue car is, and it is much worse if you park a tall vehicle like a van there. 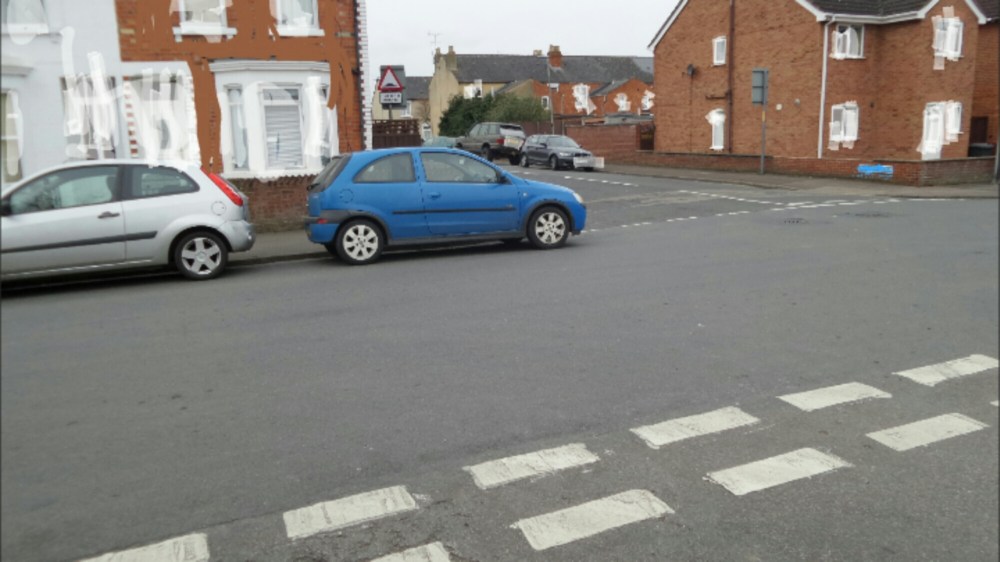 It’s a shame the debates about parking safety became an us verses them  kind of situation, it really is. For most child safety issues parents will agree with wanting their children to be safe, but for some reason parking is one of those powder keg situatitions. After I was shouted at I cycled to a police station and had a chat, for anyone in a similar situation you should know that you ARE allowed to take photographs in public like I did as long as the intention is not malicious (say for blackmail). Photographing potentially illegal parking and emailing to your local police force is entirely legal, as is blogging them. But for these I have blurred faces, street names and number plates. It’s not about naming and shaming – It’s about starting this conversation. But if I wanted to, showing the number plates is not a crime either according the the police lady I spoke with.

Would you rather park nearer your kids school and break rules and effect the safe journey of others, or can you walk a few more metres? I know some people have problems, and that is cool – although a car parked on a corner or on the yellows is still a hazard I am much more accepting when it comes to disabled drivers (and passengers). It’s still a hazard to park there but it makes sense at least.

If you’re a parent that drives to school (not just the school my son is at) can you just think whether you are making it hard to see well enough to safely. Are you at least 10 metres from the junction, not on yellows or zig zags, and not opposite a junction?

Thank you, a concerned Mother.

One thought on “Trying to make the roads safer”